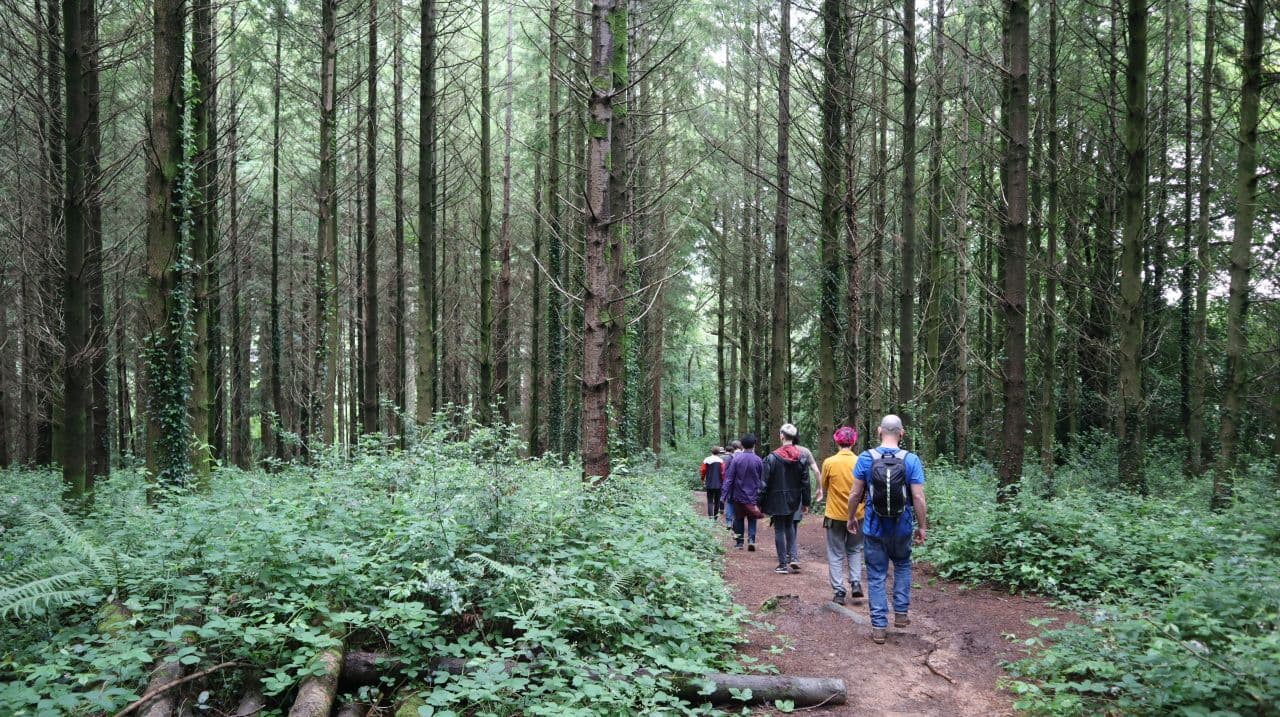 We arrived for the retreat a raggle-taggle bunch of Fellows, Founders & Coders, advisers, directors, siblings and partners, spread across 3-4 generations, not sure what we were going to do and (some) even why we were there, beyond being together.

Yet in the course of a short weekend – a few short hours for the online community – we allowed a strong community to emerge with a common path of travel. The purpose of this reflection is to explore how that happens.

The group in Devon was self-selected and, on the face of it, an oddball gathering with membership of the Intersticia community and being in the UK all we had in common. Covid and vital commitments meant many were absent, including the Intersticia Fellows around the world. All would have been invited to this gathering, and several of whom joined us online for a few short hours – but absence rather than presence was dominant at first. Even programme organisers Anni and Sam (Crock) were locked up on the other side of the world and nine hours away by the clock.

Often when a group of disparate people in a very loose organisational framework without shared purpose come together, the success or failure of the gathering is attributable to the organisers’ preparation, to clarity of objectives, a formal agenda (to manage expectations) and stated desired outcomes to be met or missed. In our case, preparation had indeed been done, and there was an objective – to reconnect the community – but agenda and outcomes were absent – an unusual experience for someone like me with a formal education and 40 years of corporate conditioning. Despite the absences of people and formality, value and promise emerged.

Anni and Sam organise Intersticia to connect and support potential and emerging leaders in any discipline from any country. The community is small and the members are personally chosen one at a time. The formal side is financial – an individual grant from the Foundation or a funding for programme such as Founders and Coders – but beyond the formal process there is an ethos which drives the choice of individuals and programmes. This is not about the eventual success of the beneficiaries in conventional or monetary terms. The connective tissue is ethical and an idea that people from any field, brought together and supported, can help look after each other, and so – by extension – care for the world, and act as its stewards, whichever part they find themselves in.

There is both content and process involved but Intersticia is informed by ideas that have emerged from the Tavistock Institute, specifically the Leicester Conference and group relations. At some point of personal readiness, Intersticia’s Fellows are invited to attend the Leicester Conference or one of its country spin-offs. Anyone reading this who has, will understand. It is nearly impossible to describe if you have not.

So this weekend in the lovely surroundings of the Dartington Hall Estate – itself home since the 1920s to an ‘alternative’ community of artists, musicians and ecologists – I got to see what the result of a community run along Tavistock lines can look like.

The first principle is that if you give a group the twin boundaries of a space and a time, and hold those boundaries in place, something will emerge that is unique to those people present and change (unspecified) will result. This is a matter of trust. The selection of different generations to be present is deliberate. There is no hierarchy – equal citizenship is understood – but the senior members of the group seem to ‘hold’ the space, their experience is felt in the unconscious.
Within the group, no person was called on to contribute ‘expertise’ or ‘knowledge’ (unless asked) but the different potential contributions were felt and came forward as they needed to.

Next, there is the designing of a framework (or preparation) which will allow people to explore. This seems to me to be an art form. It spans both the formal ‘time’ and the leisure time. So we had two online meetings with time for group discussion and 1/1s. Carefully expressed questions (about the Gift and the Wish for each of us) expanded into personal discussions during which we self-examined and listened. Our pairs were carefully selected so that a match between a present member and an online member were made. This was spatial design, not random. For those of us at Dartington, three meals were taken together as part of the programme (the traditional breaking of bread with others, as old as Genesis) and informal gatherings grew out of those.

Finally, allowing the random or unexpected to take on meaning. We took advantage of an opportunity that was ‘presented’ by the fact of being under the wing of Schumacher College (on the Estate). This was a group discussion with the founder of the College – Satish Kumar – about education and change, followed shortly after by a Deep Time Walk with Stephen Harding. This was a 4km walk across the Estate, where every step we took symbolised 1000 years of planetary history. Stefan – a scientist performer – has designed this walk to impart a feeling of wonder for geological time and to make the point that our human history spans scarcely a millimeter within that – yet our impact has become devastating.

These two powerful interventions could easily not have found a place in our agenda but they were offered and wisely we took them up – an example of coherence that can come from discovering what is present, when you do not really know. In the short feedback of the following day, several members of the group said they would continue to think about the challenge thrown down by Satish and Stephen ‘ what can Intersticia do to look after our world?’ . The full-on rain of the next day (part of the weather system which brought floods to the UK and German over the Monday and Tuesday) seemed designed to underline the point.

Next morning, before leaving, and still in full processing mode, I coined to myself the term ‘The Intersticia Effect’. It is difficult to pin down or fully account for the value of a retreat, often, and this one is no different. But connections and relationships are the supreme agency of change , and so taking really good people, setting them down in a safe container for mind, body and spirit, while giving them time to explore beyond the normal boundaries, is going to lead somewhere.

It would have been so easy to cancel this gathering – already delayed by a year – with Anni unable to travel, and so much doubt as to whether it could actually happen. I am absolutely grateful we went ahead. We have reconnected the community for another year, and we have been given a lot to think about for its future meaning. That is quite enough for now.