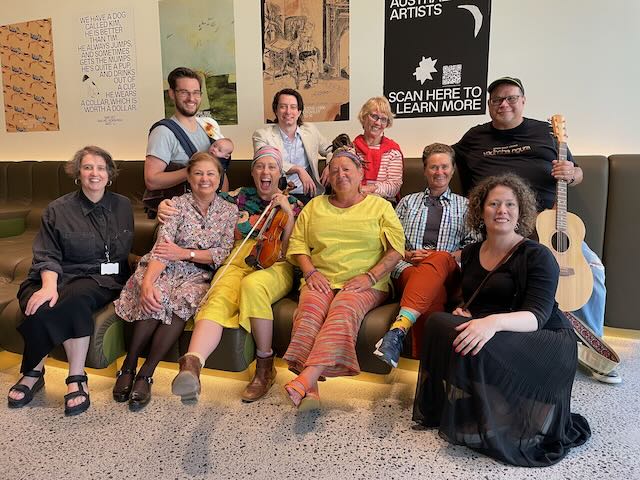 The emerging generation is one of hope, awakened and will reboot the way we live – regenerate society as you gain voice, implicitly awakened choices (Professor Lisa Miller).

Yesterday our UK Trustee Louise Sibley and I attended the World Premier of “Lost Histories“, a show based on the family history of Biripi and Gamillaroi musician Troy Russell, created for Musica Viva Australia’s In-Schools Program.  Troy, together with  Leila Hamilton and Susie Bishop entertained a small group of families from all walks of Australian life as they visited the Art Gallery of New South Wales to celebrate the opening of it’s new Library and Archive as part of the Gallery’s opening of its’ major new development.

This project came about due to Zoë Cobden-Jewitt, now one of our Intersticia Advisors, with whom we started working on our very first Australian project with the Bell Shakespeare Company when they created their Writers’ Fellowship in 2015.

As I sat and listened to Troy, Leila and Susie explore the memory-box holding these Lost History stories I began to think about the stories within Intersticia that we have all created over the past decade.  It was at the end of 2012 after Sam, Lock and I had been to the UK in the Summer with my Aunt Joan Doughton (whom our Doughton Scholarship is in memory of) that I first began seriously exploring the concept of creating a family Foundation through which to undertake our philanthropic activities, and the Intersticia Foundation Australia became a reality on 23rd July 2023.  Intersticia UK became a Registered Charity on 7th January 2019.

The idea of being able to support younger people as they journey through life began when I was a student at Goodenough College in 1985, but this was further stimulated by a conversation I had with John O’Neil, founder of The Good Life, in 2016.  The Good Life evolved from the Aspen Institute, which was created to enable business leaders to take time out to discuss philosophy, ethics and literature as a key part of their own leadership journey. In 2006 two Aspen teachers – John O’Neil (ex AT&T) and Pete Thigpen (ex Levi Strauss) realised that the lessons of Aspen needed to be brought to the tech-leaders and community of Silicon Valley, and so they created Good Life.

When I visited John in Sausalito in 2016 we talked about how important it was for elders with resources to enable and empower emerging stewards and he challenged me to create a Fellowship – a group of people of like mind that I could support in the work that they do to make the world a better place.  This is what has guided our thinking throughout the past decade and has informed the people we have chosen and the organisations we work with.

Here is an overview of our major activities in that time.

Reflecting on the last ten years it seems fitting that we close the decade by once again working with Zöe on a project in Australia whilst also exploring new initiatives globally as we have always done.

From the beginning our aspirations for Intersticia were always global.  Ten years on we have now achieved this working with a range of organisations and supporting a Fellowship of individuals from all walks of life who are all contributing to the crafting of the story of Intersticia.

I would like to thank each and every person who has been a part of this.

An individual human existence should be like a river: small at first, narrowly contained within its banks, and rushing passionately past rocks and over waterfalls. Gradually the river grows wider, the banks recede, the waters flow more quietly, and in the end, without any visible break, they become merged in the sea, and painlessly lose their individual being (Bertrand Russell).