Brave Conversations in the AnthroPause 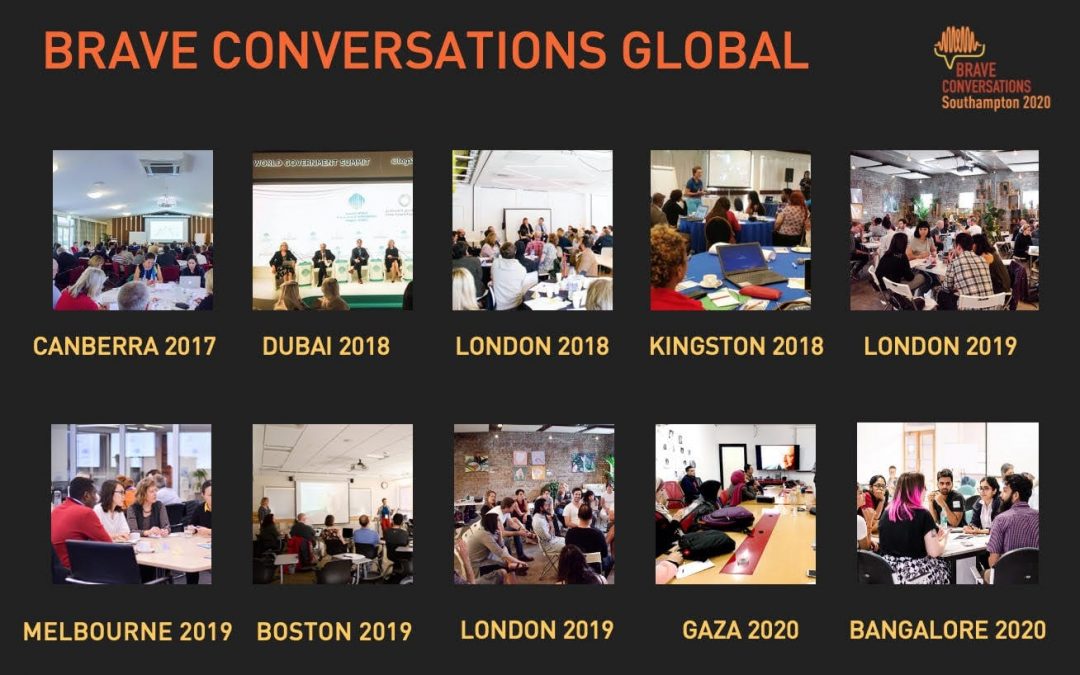 In May last year I wrote about how Brave Conversations was increasing its global reach as we ventured to London England, Kingston Jamaica, Melbourne Australia, Boston USA, and a second event in London in 2019.  In 2020 we began to extend that reach working in countries where English is not the first language with our first event in Gaza Palestine in partnership with the Gaza Sky Geeks Code Academy and then in Bangalore India in partnership with the Web Science Lab at IIIT Bangalore.

From there our plan was to go to Haifa Israel in June 2020 for an event in partnership with Kav Mashve’s Coding Bootcamp before returning to work with GSG in Gaza.  Then it was back to the UK for the annual Web Science Conference hosted by the Web Science Institute at the University of Southampton.

But, as with everything during the AnthroPause, Covid19 stepped in and the world for all of us has changed.

There are decades where nothing happens; and there are weeks where decades happen.  (Vladimir Ilyich Lenin)

Up until now our events have largely been held in the real world because we felt that this was where most people lived their everyday lives and felt most comfortable.  We have always wanted our focus to be on the human-to-human interactions unmediated by screens, time lags, internet outages or clumsy buttons understanding that as humans we predominantly live in the physical world impacted by socio-cultural and political environments.

This has meant that when we were in Boston President Trump had just issued his first Veto striking down a Senate resolution to end his national emergency declaration to build a border wall; in London 2019 we were embedded by the vicissitudes of BrExit; in Gaza 2020 we were influenced by Trump’s Deal of the Century and Israel’s impending Annexation of the West Bank and Jordan Valley; and in Bangalore 2020 we were acutely aware of the emotional impact of the Mohdi Government’s Citizenship Amendment Act 2019 and recent internet shutdown in August 2019.

In each case we examined the Social Machine from the relative safety of the physical space of being in a room where the affordances of that space enabled us to do what we humans have always done, fully participate in face to face group conversations harnessing the skills we have evolved over the millennia.

Now has come the digital moment and with it the opportunity to take Brave Conversations Southampton fully online delivered via the InterWeb.

We have become digital … as well as physical beings. There is nothing in physical experience that can fully equip us with what that really means.  (Doc Searls at WebSci20)

I have always felt that when working with groups it is best to be out in front leading whilst simultaneously coaxing and shepherding those who need to move at a slower pace, and this has been one of the strengths of Brave Conversations where groups of people can learn together through sharing knowledge, experiences and ideas.  But it is fair to say that we have only just scratched the surface of fully embracing what it means to be digital because of that relative safety.

The focus of the 2020 Web Science Conference was Making the Web Human Centric asking the question can the Web be reimagined for the public good?  When we think about it the Internet, the World Wide Web and the complementary technologies around them have been with us since the mid 20th Century but our mindset has still been largely industrial as evidenced by the World Economic Forum’s focus on the Fourth Industrial Revolution.  I have long maintained that we have been moving in to something new, something that we have not had the words to describe and which we are now beginning to fully embrace.  Time and history will give a name to this phase in human history but the reality is that we are living in a liminal space, a threshold of humanity’s next phase mediated by data and information as a currency in itself, measurable, tradable and overtly linked to power and control.

So Brave Conversations Southampton 2020 Online brought together the focus of a human centric Web with the opportunity to include people from all around the planet who had attended previous events, thus making it our first truly global event. We determined that there were two key themes which we felt impacted every one of us, regardless of where we sat, what time of the day it was or how much we knew about Web Science.

The first was our relationship with the platforms that now mediate our everyday interactions, in particular the online meeting spaces such as Zoom, and this generated some interesting reactions.  It is worth noting that had this pandemic struck a mere decade ago Zoom didn’t exist, and our digital infrastructure may not have as easily accommodated the sudden move to home working, schooling, online yoga classes and digital Bingo!  As time goes on and the novelty of living life online wears off we are beginning to appreciate the benefits but also the limitations of these media and hopefully what needs to be improved both in the technologies themselves and how we use them. The second issue we considered was that of the relationship between citizens and their governments, and in particular how people felt about the use of Covid Apps and the data being collected in the name of public health safety and security.  We analysed a Case Study based around the notion of Antibodies as a Currency (linking to the idea of Immunity Passports) which we hoped would engender some thoughtful discussions.  What became blindingly obvious was that whilst a Case like this six months ago may have generated some controversial opinions, in the Covid space now things like this are already in place and rapidly being deployed by many governments around the World, more quickly than we can figure out what to do with them.  Few have proven to be particularly effective but that doesn’t mean that the experiments aren’t happening. What was so interesting to observe during this first online event was how for most people their main curiosity was about how others had been experiencing the Pandemic, how they had coped and were making sense of what is going on.  This generated some rich conversations which sadly we were unable to fully explore due to the shortness of time and the limitations of Zoom.  However they have now inspired us to think about how to better provide the space at future events.

It has also inspired us to open up our minds to explore how we can better harness the potential of this digital moment and create innovative experiences which reach people in new and different ways.  The first of these are our Digital Gymnasia (see next post) and the second is our first dual-language Brave Conversations which will be held in English and Arabic in August for young Arab speakers around the world.

These are exciting times and ones where the world is being reinvented in every way.  We cannot go back and a new normal will emerge, one that I am confident will bring us forward on our journey of progress to a better world.