Intersticia is thrilled to announce that we now have a second Doughton Fellow following on from Chemist Berivan Esen.

I met Amira at the OFEK Group Relations Conference in Israel in February 2019, and was hugely impressed by her courage, energy, tenacity and hopes for the future of the Palestinian people in Israel, and the work she is doing within the Autism community around her.

Amira is a Palestinian Israeli clinical psychologist who has a Masters Degree in Clinical and Educational Psychology from Haifa University.  Amira works in her own clinical practice specialising in psychodynamic therapy, dyadic and play therapy and group therapy for all ages, including those with autism.  Amira is a member of the Israel Psychological Association and OFEK, the Israeli Association for the Study of Group and Organizational Processes.  In addition to her clinical work Amira heads up a therapy team as part of a private organization for children with autism that works with Arab children with Autism inside Kindergartens as an outsourcing to the health ministry of israel, and she is working along with a society of parents and professionals called Jusour (bridges)  towards founding the first school for Arab children with Autism in the Haifa District.

Initially Amira has utilised £1,000 of her Scholarship to fund six Palestinian psychologists to attend “Besod Siach” – the 22nd Conference for the Advancement of Dialogue and its Inquiry:  One Human Tapestry, Unravelings and Connections in times of Dispute.  This conference was held on 23rd – 25th July, 2019 at Batsheba Hotel, Jerusalem. 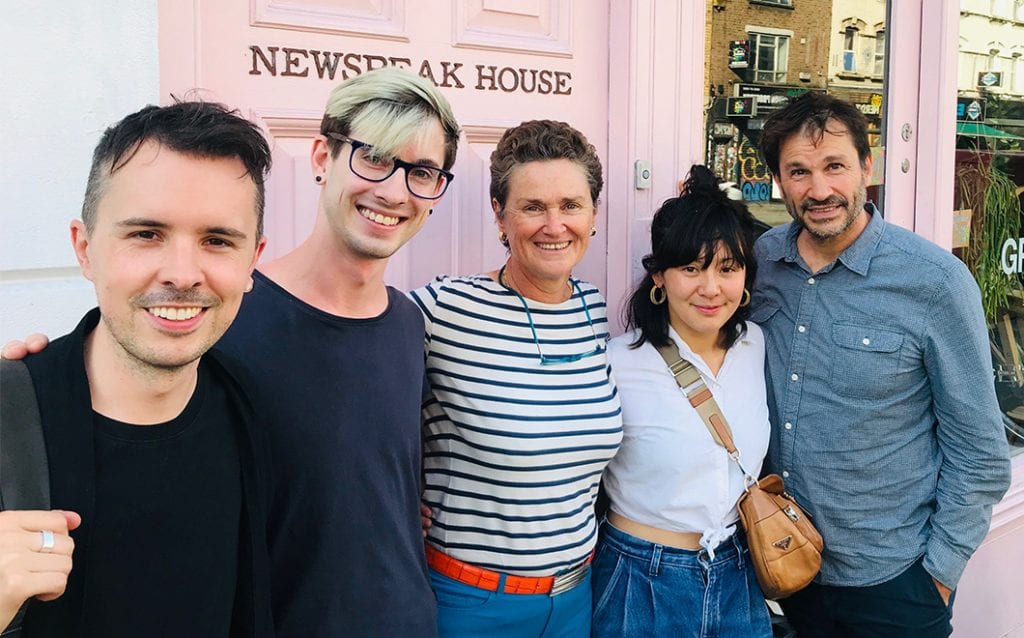 Founders and Coders started life as “Self Organising”, a MeetUp at the British Library[1] which led to a 6 week pilot at the Camden Code Academy in March 2014[2].   The next step was a crowdsourced 8 week programme in January 2015[3] (FAC4).

Founders and Coders are now about to graduate their 17th cohort FAC17, and have helped to initiate Coding bootcamps in Nazareth, Gaza and Hebron[4].

I met Dan in 2015 and quickly realised that his vision of bringing the ability to code to all those who are interested in developing a ‘literacy for the modern age’, and ours of developing 21st Century leaders, were closely aligned.  This resulted in our support to help him create the Tech for Better Founders Programme[5] and ever since we have been exploring new ways to work together and develop both the technical and social skills required to lead in the twenty first century.

Our second cohort, Oliver Smith Wellnitz and Kristina Jaggard[8] finished their Founders work and are co-ordinating the 17th FAC programme.

The Commons:  Networked City sought to progress work towards their ultimate goal of creating an online platform for supporting the development of communities and networks, both in a spatial (e.g. a local community) and interest (e.g. supporting at-risk youth) sense.

Business Launchpad aims to support young entrepreneurs (16-30) through running free workshops and mentoring sessions with groups and individuals. Part of their work involves collecting and digitizing information related to each individual’s journey in order to both better support them and to inform the future direction of the organization.  They sought to create an app that would help to facilitate their data collection while also providing something that would be useful for young entrepreneurs.

Haneen Shahwan is a software engineer who graduated from Gaza Sky Geeks Coding Bootcamp in 2016.  She worked in the management field for one year then decided to return programming.  Code Academy has challenged her and helped her develop her software engineering skills together with her skills in systems analysis, and her English and communication skills.  She returns to Tech4Better so further develop the skills she began developing during the first round of projects.

Alis has a Bachelor of Engineering in Mechatronics Engineering, from Al-Azhar University, Gaza.  He graduated in 2012 and joined the Business and Technology Incubator (BTI) at the Islamic University (Mobaderoon 2 project) before starting his own business in CNC Zone.  He then decided to learn programming and joined Gaza Sky Geeks in mid 2018.  He is keen to further develop his technical and communication skills as a team and community member.

Muhammad graduated from Palestine Polytechnic University in Aug 2018, with a BA degree in Computer Science.  He joined the GSG Founders and Coders program to strengthen his programming, management, and social skills, and also to make good relationships with people out of his country.

Orjwan heard of Gaza Sky Geeks after being unable to attend College and then entered the Coders programme after hearing about them on Facebook.  She is now a Fullstack Developer.

Shaima has an information technology degree from Palestine Polytechnic University graduating in July 2018.   After graduation she was unable to find work and then did volunteer work to gain experience before hearing about Gaza Sky Geeks when browsing Facebook.  She was keen to learn programming and communications and work with a team of students from other fields and joined the first GSG Cohort in the West Bank.

All Tech for Better Project GitHub Repositories and Descriptions: